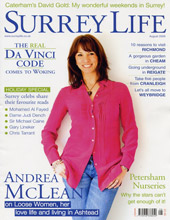 As chairman of Birmingham City FC, you’ll often spot David Gold in the skies above Surrey, flying up there to meetings in his private helicopter.  When he does get a moment to relax, he enjoys a spot of golf, a meal at his local pub and a stroll in the Surrey countryside.IT WAS my passion for flying that first brought me to Surrey and to this day it gives me both immense pleasure and a unique perspective of this magnificent country.  I started flying nearly 35 years ago from Redhill, but today I usually take off from the garden of my home in Caterham.
As chairman of Birmingham City FC, most of my trips are by helicopter to the club’s training ground where I’ll meet with the directors, manager, players and coaching staff.  I drive up on match days, in part because I can’t land the helicopter near to the stadium but also because it allows me to catch up with club business in the run up to the game.

But it’s my flights back home that give me so much joy.  When you view Surrey from the sky, it’s even more stunning than it can be from the ground.  It’s a patchwork of fields, rich woodland, hills, lakes and some beautiful properties – noticeably more interesting than other counties with bigger conurbations or vast areas of farmland.  I normally fly at around 2,000ft and 150mph but when I reach the Surrey border I like to slow down to 60 and go down to around 500ft, so I can take in the magnificent views. 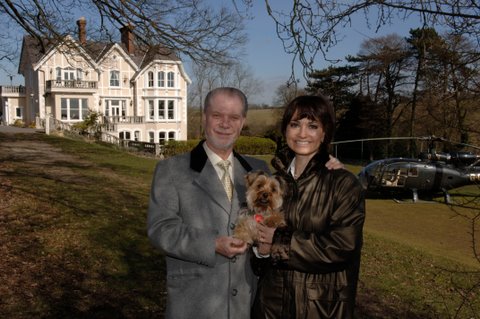 At home in Caterham
I moved into my home in Caterham in 1992 and it took three years to renovate.  We regularly host open days in the house and grounds as fundraisers for a couple of my favourite charities.  Dial-a-Ride provides free or subsidised transport for pensioners and the disabled.  I don’t think many of us realise how miserable it can be for the elderly in our community who can’t easily use public transport or afford taxis – the loss of independence can make them feel like prisoners in their own home, so I’m always pleased to lend them my support.  St Catherine’s Hospice is another charity I like to help.  They’ve recently taken over responsibility for the Marie Curie Hospice in Caterham and collectively do such an amazing job.

My office is just down the road at Ann Summers’ HQ in Whyteleafe.  We employ more than 300 people locally and thousands nationally via our stores and party plan business.  I’m very lucky having two talented daughters, Jacqueline (CEO) and Vanessa (deputy MD), running the business – and privileged as a father that we get to spend so much quality time together.  Every week, the three of us meet for dinner.
Jacqueline has just had her first baby and my first grandchild, so no doubt my weekends will increasingly include enjoying time with Scarlett Rose.

Man of the match
During the football season, my weekends centre around going to the match, while Fridays and Sundays tend to be less hectic.  I might play golf with some pals on the course I have in the grounds.  The 610 yard (par 6) 7th is the longest hole in Surrey, predominantly because the fairway doubles up as the runway for my Cessna plane!  Jasper Carrott is a good friend of mine, who I got to know through our shared passion for Birmingham City FC and it’s he who holds the course record, while actor Robert Powell is the only person to get a hole-in-one!
On any given Sunday, my fiancée Lesley and I get taken for a walk by our beloved Yorkshire terrier Daisy – we’re sure that she thinks’ we’re her pets!  We love to stroll the grounds and walk up to the viewpoint, where there are stunning views south over to Redhill and beyond.
Lesley and I also like to eat out and often pop down to The Bell at Godstone – they deserve a mention, not just for the great food, but also because I always get a seat by the fantastic roaring fire they have in the winter.

David Gold will be opening his garden for the National Gardens Scheme on March 27, 2010, in aid of St Catherine’s Hospice.  For more details, see www.ngs.org.uk