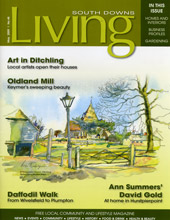 You could be forgiven for misinterpreting the stylish DG belt buckle and discrete shirt monocle as Dolce & Gabbana designer labels or the Roller’s D 6OLD number plate as trappings of ostentation.  But in needing to re-emphasise his identity, David Gold – the slight, deprived East End  boy now worth £450 million, helm of Ann Summers and Chairman of Birmingham City Football Club – perhaps isn’t as self confident as he might portray.

Self made and self-coached, driven by the desire to succeed borne out of a fear of failure, he cultivates a fragile aura of confidence as he sagely quips: “Life’s what you make it.  I’m in control of my life. “He is as terrified of psychiatry and counselling as he is despising of horoscopes.  “I don’t want doubts to influence me.”

David Gold confesses he was “hugely disappointed” with his autobiography Pure Gold. It didn’t portray the full story.”  So he is in the process of rewriting it, changing the title to Solid Gold, for publication in time for Christmas.  “This time I’ve done it all myself.  I went back closer, portraying what I believe I saw.  I wish spellcheckers were here 50 years ago.  I’d never use a – what’s it called – thesaurus,” he stumbles for the right diphthong.

A theme of reviewing, improving – perfectionism – in David’s life starts to emerge.  “In business that’s exactly what we do: design stores, make them more efficient, cost effective. “Even down to the way he speaks he was determined to change his accent and extend his vocabulary.  “Perhaps not a drawback to getting going but I had to improve for the next level, had to or I’d be stuck.  “Peppered with a need for approval, in key areas absent – “My father referred to me as ‘my tycoon son’ but he still looked down on me” – pride plays a big part in his league table of life: places, football, rich list.David Gold reviewing

Business publicity shots of David Gold present a blank smugness – all steely blue eyes below a be-furrowed brow, lips curled in Self-satisfaction – and not the warmth and open-faced expression which beams in the comfort of his and his fiancée Lesley Manning’s Hurstpierpoint home.  He flushes slightly at the compliment and, using Alan Sugar as an example, comments on the association of success with aggression.  “TV encourages it 100%, you have to be aggressive.  But I don’t think you have to be rude at all.”  Football analogies rarely far from his syntax, he jokes about sour-faced managers winning 5:0.  “There are so few winners but business magazines don’t want smiley.”

Luck, he contends, has been a big part of his success.  He sold business assets, including The Sport Newspaper, before the start of the recession.  “That wasn’t intuitive; I haven’t got the Midas touch.”  He puts his ability to talk and communicate with people down to his experiences from football.  Dispelling the seedy ’adult entertainment’ mogul stereotype his past might conjure, here’s a gentle, charming, warm man feeding biscuits to Daisy, a rescue Yorkshire terrier.  According to Lesley, Daisy is the only creature who doesn’t do what he says.  “He’s not used to that.”

Lesley and David have homes in Hurstpierpoint and Surrey but feel an immense sense of warmth for the Hurst community.  “The village is so positive – the festival, art houses, open gardens.  “They opened the gardens at their Caterham home, set in 55 acres with pool and golf course, but generally people didn’t visit in the same friendly way.  It seems in voyeurism size matters.  Lesley recounted the irony of elderly Dial-a-Ride visitors taking home their spoils in Ann Summers bags.  David’s mother lived into her 90s, “grasped every moment of life” and had a car available at all times.  “Supporting Dial-a-Ride, it gives me great delight to give that mobility back to elderly people.  “Lesley’s parents recently moved to Hurst.  “There’s so much going on for older people – the over 60’s, WI and great community facilities.”

With bashful humility David shrugs at his unpublicised philanthropy – “I don’t know why; I can hardly say. “ From Hurst festival programmes to horse sanctuaries and Dial-a-Ride, “the trouble is I’m involved in so many things.  You do your best.  “David will print the Hurst Festival programmes again this year.  “It’s amazing what the festival organisers achieve – the support and the use of locations, like using the church as a community centre and for events.  I do question whether they try to do too much; after all you can’t go to two events in one night.  “Lesley is on the committee and elegantly sashayed down the runway for the Ladies’ Night last year.  “It was a very good show – for all shapes, sizes, ages – there was something for everybody.  “And in their quiet unassuming way they try to do the same.