Nothing is forever, says the one-time bricklayer with the Midas touch 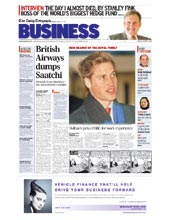 “THE businessman in me was saying sell. The boy inside me was saying are you sure?” David Gold freely admits that the sale of Gold Air, the aircraft chartering business, to Aim-listed Air Partner has left him with mixed emotions. 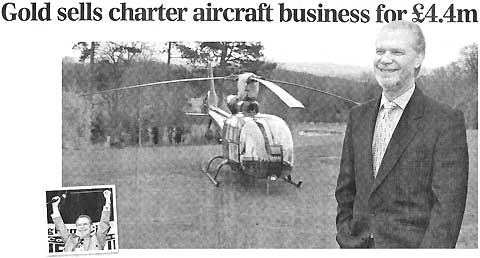 “They made me an offer I couldn’t refuse,” said Mr Gold, who alongside his brother Ralph owns the Ann Summers retail chain and Birmingham City Football Club. The family also has a 50pc stake in Sports Newspapers, publisher of the Sunday Sport.
The Gold Air business was founded in 1997 after the brothers became frustrated with the level of service they received as they flew around the country following Birmingham City.
“Ralph and I wanted to go to Newcastle for a match and needed to be back by 6pm, so we hired an air taxi,” recalled Mr Gold in a recent interview. “It was a near-death experience. The plane was 30 years old and flown by what appeared to be a 14-year-old boy who smoked.” Mr Gold decided they could do better.
Today, Gold Air, which is based at Biggin Hill in Kent, generates sales of more than £ 10.8m a year jetting footballers, pop stars and businessman around the world. A fixed-wing pilot for 35 years and a helicopter pilot for four. Mr Gold is passionate about flying. So why has he sold? “I have enjoyed it. But things change. Nothing is forever. You move on to the next challenge,” he said.
The sale, he adds, will allow him to focus on Birmingham City and getting the club back into the Premiership. He is also still involved in the Ann Summers business, although his daughter, Jacqueline, runs the business day-to-day.
And he will still have his Gazelle helicopter to play with.
“If I can find the time, I will fly it around the world,” he said. “I wish I had got my helicopter licence 40 years ago, not four.
“It’s not an indulgence. I can be in Birmingham in 45 minutes. With jet fuel at 22p a litre, it’s worth it,” he added.
The Gold brothers made the vast majority of their fortune from soft pornography and property, and in the 1970s they were tried, unsuccessfully, three times for publishing obscene material. “I’ve never published a product I am ashamed of -never, ever, ever. Girly mags are wonderful. Think of the joy they have brought to millions. That’s pride. Okay, it’s not got me a knighthood, yet, but…” he said earlier this year when promoting his autobiography, True Gold, In 1993, the brothers added Birmingham City to their interests and David Gold has now been chairman of the football club for more than a decade. The group also owns the Knickerbox retail chain. The family empire – Gold Group International – is estimated to be worth more than £500m and is one of the most profitable private companies in the country. The family were placed 92nd in last year’s Sunday Times Rich List.
Brought up in the East End of London, David Gold’s first job was as a bricklayer. He now lives in a mansion in Surrey, complete with a 19-hole golf course and lake. He paries his beloved Gazelle on the lawn.
By Richard Fletcher
Deputy City Editor