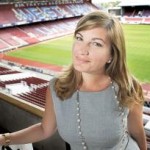 ‘Bonkers’ if move to Olympic Stadium falls through, says glamorous chief executive, who reveals her vision for fans to share season tickets with NFL and how Irons should aspire to be like Arsenal. Margareta Pagano speaks to Karren Brady

Boris Johnson watch out. Here’s a woman after your own heart who knows exactly what she wants; the Olympic Stadium as the new home for one of the UK’s oldest and finest clubs, West Ham United, which she is convinced will put the fire back in the belly of East End football. But there’s more. Karren Brady, who’s been in the hotseat as vice-chairman of the Hammers for six months, wants the 80,000-seater stadium to bring “soul into London sports” by combining football, athletics, cricket and entertainment in one place, creating a lasting legacy for the UK from the 2012 Olympics.

“I can’t see any better use for it than my plan,” she says. “At the moment there is no long-term strategy or future. But my plan is not just to have a new stadium for West Ham but a real sporting centre for London: we’ve plans for joint season tickets with athletics, Twenty20 cricket, rugby, and we are talking to the NFL.

“West Ham need a bigger stadium as [Upton Park] can hold only 32,000 spectators but we could take 60,000 fans. We would also build a museum – don’t forget West Ham had more players in the 1966 World Cup final than anybody else. We’ve had some of the best players in the world – Bobby Moore, Trevor Brooking – it’s endless. Then there’s bringing new and old fans back to the club – I’ve got plans to bus up to 5,000 youngsters, both local and those who have moved out into more affluent Essex, back to watch matches, helping boost our fanbase and grow the club.”

There’s more. “When teams like Manchester United come to play, we’d have a proper pitch for them, somewhere good for the players to stay; they could go to the new Velodrome, the Aquadrome and we’d be helping bring business to the area, into the hotels and shops. It would help regenerate the whole area, bring jobs, training, new skills. We’ve got plans for a school on the site, working with the community and NHS for new services. Then there is using it as an arena for bands and shows; the point is we can bring it altogether. What better legacy could there be?”

Without pausing for breath, Brady answers herself: “Our plan would bring soul to this part of London which it needs so badly. It would be two big regenerations schemes in one – our Upton Park site could be developed, helping the district, and then the area around the Olympic stadium. I think Boris Johnson understands that if he’s not careful, he could have the largest white elephant ever sitting on his doorstep. He’s the ultimate owner. What a waste that would be.”

You don’t doubt Ms Brady. And she’s got lots of support for her Olympic pitch – including the local council, Newham, UK Athletics, Essex Cricket Club, City Airport and, as of last week, Westfield, the Australian property company who are building the £1.5bn Stratford City redevelopment which plans to bring shops, hotels, offices and flats into the area.

Brady claims many of the other ideas for the Olympic stadium when the Games finish are “bonkers”. One idea is to rip off the top tier of the stadium to bring it down to a more manageable 25,000-seater arena, more appropriate for athletics. “Bonkers,” says Brady, simply. “Complete lunacy. Why would you do it? It’s a sin too great to bear to have to rip off the top after all the work that has gone into building it. Just taking off the roof is estimated at £38m. All that stuff about the athletics track being in the sight-lines is a red herring. Even the huge media centre could be turned into a sports academy.”

Brady says her ambitious project will cost about £125m. How on earth will West Ham, who are still financially under the hammer, find the money? As you would expect, Brady reels off the numbers; extra money from takings at the gate, backing from the London Development Agency and other bodies, as well as “prudential” government loans.

But putting together a proper bid – which will cost the club about £250,000 or more – is why she has asked for a six-month exclusivity period from the government. “We’ll hear by the end of the month whether we’ve got it – I’m quietly confident. I would never say I’m 100 per cent sure but I expect to get it; it’s a no-brainer and absolutely right for the club and the community. It’s logical and makes sense.”

We meet at Upton Park in her tiny, dark office off one of the many, endless corridors that circle the ground, with only a small porthole of a window looking across to a local housing estate: “You should hear some of the domestics which go on, hilarious,” she laughs, “but at least I have a window, most of the offices don’t.” One of the first things she did on joining was to order a refit and building work is nearly finished for an open-plan office for the 50 or so staff.

“It was like West Ham Country Club – the place and the people were run down, physically and mentally. My style is to be an honest manager, to tell people what I expect of them, give them short-term goals and long-term strategy. You also have to give people self-confidence, self-esteem, and this place needed a lot of that.

“I’ve brought in three senior women. There was no diversity – all men – the sort of men who followed each other everywhere, and eventually off a cliff – a bit like the bankers during the crash really. There were no systems, no authority, no communication. Hopefully I have been able to inspire them, even some of the players, like Kieron Dyer, the midfielder who had been out with an injury for nearly a year.” The injury-plagued Dyer is back playing again, she adds with real delight.

When I ask how she thought the England team – which had two West Ham players, Matthew Upson and goalkeeper Robert Green – performed in the World Cup, she sighs: “Well, it was an anti-climax. In my humble opinion, the team had Sven – the partying, hard-playing, fun manager and then had Capello who told them what to wear, what to eat, who to phone. Instead of choosing someone in between which is what England should have done, it just didn’t seem to work. Some of the team didn’t know what they were meant to be doing.”

Big changes at West Ham are also on the cards. “West Ham have had a difficult time, came close to relegation. That’s why we brought in Avram Grant to replace Gianfranco Zola – who is a really nice guy but not right for us. The manager is the most important person of all – more important than David Gold or David Sullivan, far more important than me, I’m just the chief executive. The manager sets the DNA of the club; if the manager is upbeat, so is the team, if he’s down, so is the team. But Avram seems to have the right DNA. He comes across as dour on TV but actually he’s very witty, very funny. Arsenal is the club we should aspire to; fantastic reputation and sound finances. Avram understands the value of money. ”

Ah, money. While Brady is working on getting the revenue up and the £110m debt down, Grant and Gold – who played for the Hammers as a schoolboy – and Sullivan are looking for new talent and clearing out some dead wood. “We’ve got to be realistic, the team needs changing and, yes, everyone is theoretically up for sale apart from Scott Parker – he is the face and culture of the club.” But they are not in a hurry, although talks are ongoing with Nice striker Loïc Rémy.

Brady is dressed to kill, a figure-hugging grey sleeveless dress and lots of expensive bling including a Chopard watch, a present from her husband, ex-footballer, Paul Peschisolido, now the manager of Burton Albion. Early on in her career – she was only 23 when she went to Birmingham City – she says being young and female was a double disability. I doubt even she thinks that anymore; Brady is still only 41 but her youth and sexiness together with razor-like business skills seem pretty lethal advantages to me.

“You know,” she says, “the biggest criticism I hear about football is that it’s become remote from the fans; you can’t see the players anymore, can’t touch them, the only place you do is on the front pages – or back pages – of the newspaper. Even when they train, they are shrouded in mystery – no one can get to them and the fans don’t see them anymore. I have a vision that we can create a place at the new stadium where fans and supporters can come and be part of the club, see the players training, take part in the whole experience.”

It is no wonder Brady is working flat-out as she’s invested her own money in West Ham – a couple of million for a few per cent. Gold and Sullivan paid £50m for 50 per cent and recently bought a bit more. She’s just bought a small flat in London to be closer because the commute from Birmingham was getting too hard. But she’s still in the office before 8am, doesn’t leave till early evening, when she fits in the other stuff – being on the board of Sir Philip Green’s Top Shop group, Mothercare and Channel Four (although she’s about to step down) – and a new assistant to Lord Sugar on The Apprentice.

So who do her children support – West Ham or Burton? “Sophia, who is 14, didn’t even know I had left Birmingham until she saw the team sheet at Chelsea, so she isn’t interested – although she’s working in the stadium shop this week. Paolo, who is 11 and wants to be a footballer, supports both.” What about her? “West Ham is a great club and it’s hard not to fall in love with it.”

Leaving the stadium, one of West Ham’s longest-serving staff, Gill Moore, now in charge of operations, whispers to me: “See what I mean, she’s a breath of fresh air isn’t she?” I’d say more of a tornado.