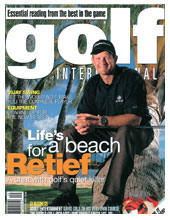 FINANCIAL SUCCESS certainly has its benefits – boys’ toys like the private jet, a Bentley, chairmanship of a Premiership football club, the obligatory indoor swimming pool and floodlit tennis court. The 67-year-old David Gold has all this and more but he also has what is surely the ultimate toy – his very own golf course in the back garden of his Surrey mansion. To eschew convention, he has made it 19 holes to ensure that it ends up near his house. And the 602-yard 6th doubles up as a landing strip for his four-seater Cessna 182 Turbo jet, which he flies himself.

The course, built around his 19th-century mansion called The Chalet’, just off the M25 at Caterham, is a testimony to Gold’s extraordinary rise from humble beginnings in London’s East End to become one of Britain’s wealthiest businessmen. He is ranked in the top 100 of the Sunday Times Rich List with a fortune of £495 million. The Gold empire embraces Ann Summers, the sexy lingerie group run by his daughter, Jacqeuline, which has a chain of more than 130 shops; a private charter-jet business called Gold Air International; and a publishing business which includes part ownership of the Sport newspaper with David Sullivan. Gold is also chairman of Birmingham City football club and owns half the company.

From almost the first day Gold bought the rundown mansion 12 years ago, a homeless, scruffy-looking man called Mark Parmenter knocked on his door, looking for work. It was just after £5,000 worth of tools had been stolen and Gold employed him as a security man. Parmenter slept in a caravan in the grounds for the next two and a half years and today he still works for Gold, doubling up as his driver and head groundsman. He has now been given an apartment within the house and Parmenter has attended night school to become quite an expert on maintaining golf courses.

On Gold’s course, there are 10 greens in the 19 holes and the 5th tee, for example, is used for four different holes. Golf is a game that Gold has unexpectedly taken to. When he was renovating the house and restoring its huge grounds, for fun he decided to build a tiered putting green.

Gold got the golf bug and then employed experts to ensure that it drained well and was laid correctly.

Then he started chipping on to the green and, as he says: “I went back 10 yards and another 10 after that, and before I knew it 1 had got my 9-iron out and I had built a proper tee.” Then he had sprinklers installed on the green, four more holes were built, and the following year a further five were added. “I designed it,” he says. “I never had any plans in mind, but I thought it would be a bit of fun.” He describes himself as a “hacker who enjoys the game immensely’. More holes were built until finally he had his par-70 course. Along the way Gold was buying up land around his estate, which included an illegal gypsy site. Today his house is set in 55 acres.
old generally shoots around 85 but he says his course plays 10 shots easier than one at a traditional club. The 5th is only 177 yards long but he plays it as a par-four. Similarly, the 11th is only 172 yards but it is also designated a par-four. One of the few times he plays at a different venue is for the annual Birmingham City versus Aston Villa golf day, which is either at the Belfry or the Forest of Arden. Tensions run high at that occasion. Gold says: “That is one match we can’t lose.”

He sometimes uses his course for corporate events but more often than not he just plays with his brother and two chums. “We don’t play for money, we play for more than that. It’s for pride, and we all take it pretty seriously.”

On very cold days, Gold has taken to playing the course in bis four-wheel drive Cherokee. As he jokingly points out: “It’s the advantage of owning your own course – I had a chat with the club’s chairman to see whether it would be acceptable and he said fine. Sometimes you have got these lovely days but it is freezing cold. 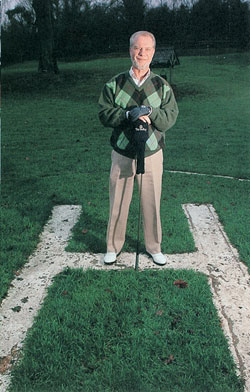 I would not have bothered going out had I not come up with this new idea. Sometimes Barry Fry, the jovial football manager, sits in the back and cracks jokes. “He’s a great pal but a lousy golfer,” says Gold.

Hanging in Gold’s house is a framed scorecard signed by his friend Jasper Carrott, the comedian and arch Birmingham City fan, and Robert Powell,the actor. It’s from the summer of 1999 when Carrott set a new course record of 73. Not to be outdone, Powell achieved ahole-in-one on the 15th in the same round.

Gold is immensely proud of his business achievements. Ann Summers, which was once a name mentioned only in hushed tones, has become an acceptable face on the high street The past is a long time ago. When he was 21,Gold borrowed £700 to take over the running of a bookshop specialising in early-60’s erotica.

Its success led to the purchase of four more stores and he has never looked back.When he was a schoolboy, he failed his 11 -plus exam and his teacher told him he was never going to make anything of himself. If the teacher were still alive, I’m sure Gold would take great pleasure inviting her for a round on his private course -perhaps in the front seat of his Cherokee.