Chairman David Gold has insisted Birmingham will “never again” be dragged into the off-field turmoil which he believes led to them being relegated from the Barclays Premier League last season. 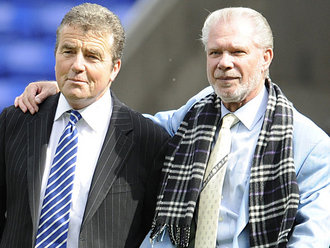 Gold (right) – has learned from mistakes.

Blues were the subject of a takeover bid by Hong Kong businessman Carson Yeung who became the club’s leading individual shareholder but never went through with a full buy-out of the club.

It played a big part in costing them the services of manager Steve Bruce who was unable to obtain guarantees from Yeung about a new contract and what funds would be available for new players.

Gold is adamant lessons have been learned as he pledged that manager Alex McLeish would be given financial backing this summer after leading City back to the top flight.

“We have learned from that. I wish I had been stronger and firmer at times. We will never do anything like that again to put our football club in any jeopardy.

“No-one is perfect. You do your best. But if you take our record overall as a board, it speaks for itself. There is no question I have made mistakes.”

Gold is adamant Birmingham will take a realistic approach in terms of what funds will be made available to McLeish and is determined they will not suffer the financial problems of other clubs.

He said: “You would like to think when you get into the Premier League that you will stay there forever and will eventually challenge for Europe.

“You have to invest and what I can promise the fans is that we will invest every penny the club generates.

“But you have to be realistic until more funds come into our football club via partnerships or whatever way they might come in.

“We have to make sure if we get relegated again – and I don’t think we will – we will be a club that will be strongly capable of challenging again.

“We won’t be a Leeds, Southampton, Leicester etc. We won’t bankrupt the club. Whilst we are in charge, that won’t happen.”