David Gold’s life appears to be one of targets set and goals achieved. As an out-of-work ‘brickie’ in 1960s London, he wanted to move up in the world and taste some of the finer things in life. In the years since then, he has become one of Britain’s wealthiest and most successful businessmen, and was recently listed among the country’s 100 richest entrepreneurs. 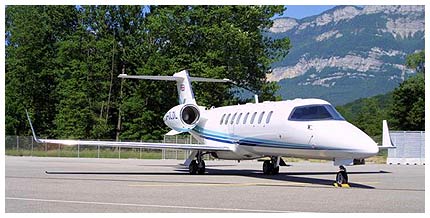 A football enthusiast, he recognised that the early promise he showed playing left back for local youth teams would never be quite enough to put him alongside his heroes, Stanley Matthews and Tom Finney. Instead, he went on to become chairman of one of the top premier division football clubs in the country, Birmingham City.

Bitten by the aviation bug as a 16-year-old air cadet, he progressed towards earning his helicopter and fixed wing licences, winning the Malta Air Rally twice, and setting up his own charter air service, Gold Air International.

Today home for 68-year-old Gold is a delightful rural retreat which comes with its own golf course, tennis courts and three helicopter landing pads (to allow a safe landing, no matter what direction the wind blows from), all just a five-minute flight away from Biggin Hill. Blessed with a friendly, welcoming nature, he was more than keen to reminisce about his love of aviation, smiling as he recalled his first experience in the cockpit.

“I remember the pilot looping it and spinning it, and I was just holding on for grim life.”

“I actually went up in a Tiger Moth when I was probably 16 years of age and an air cadet in Hornchurch, and I was absolutely terrified. They put me in a parachute and I have to say, if the engine had stopped and we’d have had to jump out, I just wouldn’t have known what to have done – health and safety wasn’t top of their agenda in those days.”

“I remember the pilot looping it and spinning it, and I was just holding on for grim life. The straps were too big – I’m wobbling around – and the whole experience was just me trying to survive the 20 minutes I was airborne. It wasn’t a matter of enjoying it – it was more a challenge to stay alive and not fall out.

“But you know, whilst I was terrified, it was also a very thrilling and amazing experience.” 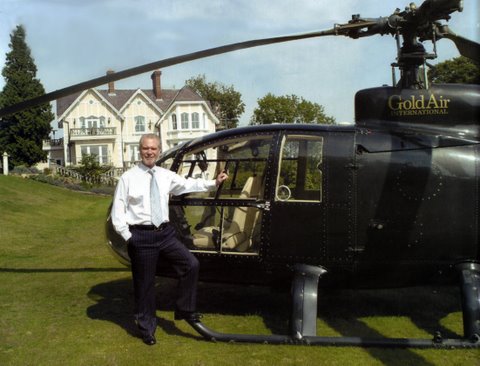 Unfortunately, as is the case with so many early flying experiences, from that point on aviation ground to something of a halt for young Gold. As an apprentice bricklayer earning £2.17s a week, the funds simply weren’t available. However, fast forward 20 years, during which time he had began to build the basis of a very successful business empire, and Gold was living near Biggin Hill, passing the historic airfield on his daily drive to the office. Then one day, rather than simply shooting past, he decided to stop and watch the aircraft taking off.

“It took me back to my memories of Hornchurch, so I popped into Biggin Hill Flying Club (which I ended up owning) and said that I’d like to take a lesson,” recalled Gold.

“The chap said ‘OK’ and we walked out there and then – I think that they were a bit short of cash – and climbed into a Cherokee 140 four-seater.

“It was a delight learning in a 140, in the sense that it wasn’t really a training aircraft – it was a tourer. So once I eventually completed my licence, I was straight off flying in a tourer, as opposed to most people having to g onto another aircraft.”

Unfortunately for Gold, however, those early lessons were tainted by an aggressive and bullying instructor who gave him such a rough time that after some 15 hours of instruction, he seriously considered giving up.  Luckily. The instructor soon got his much sought-after right-hand seat with an airline and Gold was able to complete his lessons with a far more affable teacher, finally gaining his PPL in a creditable 50 hours.

Over the next 20 years, he build up his experience and hours with a variety of aircraft, including a Piper Aztec, Cessna 140, a distinctive Cessna 337 with its push/pull propeller design, and a Turbo 182 Cessna, which remains his current fixed-wing choice. In fact, it was in the Cessna 337 that he went on to win the prestigious Malta Air Rally in 1981 and 1982.

“It was the premier event that everybody did in those days, and people would come back with fantastic stories and sometimes trophies,” recalled Gold. After deciding to enter and finishing a lowly 23rd at his first event, he eventually went on to achieve his double success.  Unfortunately, it was the Malta Air Rally that was also to bring about one of the lowest points in Gold’s aviation career. 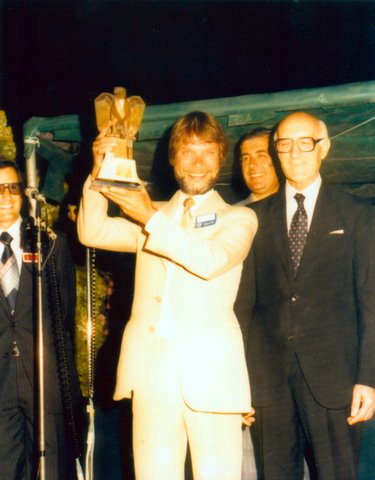 While demonstrating in their Harvard just after the event one year, two of Gold’s closest friends crashed the aircraft and were killed. Shortly afterwards, another close friend perished when the Citation he was piloting crashed out at sea, and although all on board survived the impact, tragically they were drowned. As a result, Gold gave up his flying and concentrated on his increasing business commitments. But once aviation is in your blood, it has a funny habit of never letting go, and some years later he was drawn back to the aviation scene.

By now he had become the Chairman of Birmingham City Football Club, and the need to get to matches, along with an expansion of his business interests in Europe, mean that he needed the services of an air taxi company.

“So off I go to Biggin Hill and book an air taxi for a flight up to a match in Newcastle,” he explained. “After asking where the company was, I was directed towards a shed, where there seemed to be nobody at home. Eventually, what appeared to be a 14-year-old in epaulettes comes across, explains that he’s my pilot for the trip, and takes me over to an ancient Piper Aztec for the journey.

“By this time there’s no turning back, so I get into the plane. By 300ft, we’ve gone straight into cloud and by the time we’ve got to 1,000ft, the pilot is smoking a cigarette and drinking from a can of Coke. If I hadn’t have been a pilot, I might have thought it was OK, but I was sitting there absolutely terrified.”

While this experience might have put lesser men off charter flights altogether, Gold recognised the need to act. The following day, in typically dynamic style, he ordered a brand-new King Air 200, complete with two in-house pilots, to deal with his business needs.

“…with a helicopter, it’s so ‘hands-on’ – you’re flying every second and really feeling what’s happening “

Soon, however, with requests from friends and business colleagues demonstrating the demand for quality air charter travel, Gold found himself ordering a second King Air, buying a hangar at Biggin Hill and founding his own charter air service – Gold Air International.

Around the same time that the fledgling Gold Air was finding its feet, Gold met a 75-year-old Russian pilot and his wife who had flown into Biggin Hill from Russia in their own Lear Jet.

“For me it was a great motivational moment,” recalled Gold. “Not only did it move Gold Air International towards operating Lear Jets, but it also motivated me into getting my licence back.”

So Gold returned to flying, taking a new set of lessons, sitting ground exams, and enjoying every moment. “It was wonderful, and just like riding a bike – it all came back with no real problems, along with once again experiencing the thrills of going solo and earning the licence.”

Three years later, he added a helicopter licence to his fixed-wing qualification, something that he says years earlier.

“All of my flying has been as a gentleman tourer, with autopilot, air conditioning and all of those quality facilities in a fixed-wing aircraft. But with a helicopter, it’s so ‘hands-on’ – you’re flying every second and really feeling what’s happening, something that just isn’t the case with my luxury Turbo 182 Cessna.” 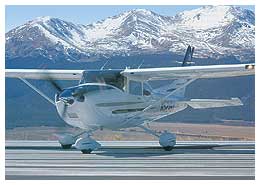 Of course, as any pilot will tell you, even with all the latest instruments aboard, a beautiful aircraft such as the 182 Cessna doesn’t give a pilot immunity from accidents, as Gold found out a couple of years ago.

On a regular flight from the private strip in his garden to see the Birmingham City players practise at their Midlands training facility, Gold was forced to land at a slightly different part of the facility than the one he was used to.

“Looking back on it, there were a number of different issues that influenced what was to happen next,” he explained. “Birmingham air traffic control said that the wind was calm, and in fact I probably had six or seven knots on my tail. The grass had been cut that morning so the whole surface was little cuttings, and I subsequently learnt that this was like ball bearings to an aircraft. And I was probably coming in five knots faster than normal. So all of those three things added together, and the runway was suddenly 20 yards too short.
“The outcome was that I ran into a grass bank and wrote the aircraft off. I bit my tongue and bruised my ribs. But more importantly, I bruised my pride and couldn’t believe that a combination of errors had culminated in me crashing my aircraft.”

“The redeeming feature is that I did two things that I’m pleased with. For a moment, I was going to apply power and go around, and I believe that if I’d have done that I could have hit the mound and the consequences could have been disastrous. In addition, I pulled the mixture to turn off the fuel, so avoiding possible fire on impact.” 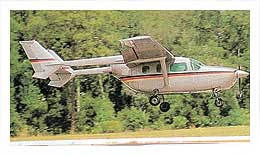 The situation probably wasn’t helped by the press coverage the incident received.

“When I won the Malta Air Rally 20 years earlier, one newspaper included a couple of sentences along the lines of ” Biggin Hill pilot wins Malta Air Rally ” recalled Gold. “But when I crashed the Cessna, they all had lead stories going into great detail about how the Birmingham City chairman had crashed his aeroplane.”

Always one to find a positive in any situation, Gold was quick to point out that one outcome of the crash was that he went on to learn to fly helicopters.

“My chief executive at Gold Air, Will Curtis, always thought that the strip at the training ground was too short, and he said, I wish you would get a helicopter.” 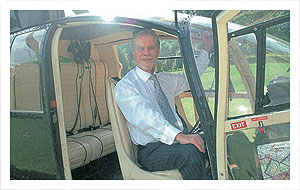 Within a short period Gold had taken the advice to heart and was soon on the way to a PPL(H), under the guidance of instructor Norman Collins. “The actual flying in the helicopter is just like fixed wing, although with a bit more rudder requirement,” explained Gold. “Then you come to the hovering and it separates the men from the boys. The instructor said to

me, We’re going to try some hovering. I’m going to say you have control and then I’ll say “I have control”. OK, that’s normal instructor talk, I thought. So he says, “You have control, one, two, I have control.” I was actually in control for two seconds on my first control in the hover.

“I was shocked that my 35 years of flying meant nothing when it came to hovering.”

Once the hover had been mastered, however, Gold went on to gain his PPL(H) and now regularly pilots his own Gazelle 1, registered G-OLDH, to and from business meetings.

For a character who has achieved so much in his business and personal life, David Gold remains a man with a passion and a drive for the things that make up his colourful and varied life. As for his aviation, one ambition remains. “I think that I would like to be the first pilot to retain his licence at 100 years old.” And David Gold being David Gold, you wouldn’t put a lot on him not succeeding in this.