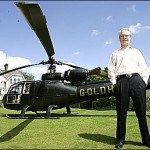 THE stylish opulence of David Gold’s Surrey sprawl is in stark contrast to his deprived roots.
As a kid, West Ham’s new co-chairman survived the Blitz, bomb-sites, hunger, illness and anti-Semitism in East London.

Growing up, he overcame being denied his dream of playing for the Hammers and flirted with the Krays’ notorious gangland scene, before eventually becoming a prominent figure on Britain’s Rich List.

Last week, along with his business partner of the past 30 years David Sullivan, Gold finally took control of West Ham.

It’s a football club not just close to his heart, but close to the terraced streets where he was brought up and began his rags-to-riches journey.

“If it was a book then you might say good read, great story, but utter fiction that would never happen. But it has,” smiled Gold from the comfort of the drawing room at his 55-acre Victorian mansion, where his estate includes a golf course, helicopter pad and jet runway. And a little Yorkshire terrier called Daisy.

When Gold was a ragamuffin post-war boy living in a two-up two-down in Green Street, West Ham’s Boleyn Ground was virtually opposite and a symbol of something special. It was a place where on a Saturday afternoon the dockers, as well as the duckers and divers, stood side-by-side watching their local football team play.

“To be honest I never paid to get in as a kid,” he admitted. “We had no money, so I would wait until half-time when they opened a gate in the Chicken Run and bunk in.

“But from the age of seven it was a special place.”

He is paying back now and some, having joined Sullivan in paying half each for the £52.5million takeover, which for the time being gives them 50 per cent of the club’s equity.

Having beaten off three other bidders, Gold and Sullivan have a controlling interest for at least four years when they can exercise an option to buy the remainder.

There are some cynics who will argue Gold and Sullivan have pulled off a master business stroke.

But had their deal, which has been on the table for more than five months, not been agreed then West Ham could quite easily have gone bust over the next few months.

When push came to shove Gold and Sullivan, who recently sold Birmingham, had the hard cash to make the deal viable.

And just a little time spent in the company of Gold illustrates that West Ham is a club now back in safe hands – not at the mercy of volatile consortiums or maverick foreign owners.

“Look, let’s make no bones about this, we eventually did the deal with less than two weeks of the January transfer window left,” stressed Gold.

“Had it not been done then West Ham would be hurtling towards a Leeds scenario. Had a takeover not happened now, the club would have had to sell two, even three players to raise the £20m needed just to pay the bills for the rest of the season.

“Of course that nightmare scenario would have pushed the club towards relegation. With more top players then going it could easily have seen the club ending up in the third tier.

“Now I hear the argument that while we seemed in the end to be the only people with the hard cash – the very hard-earned hard cash – that maybe we would have let things unfold and then take advantage of the scenario, picking the club up from the floor after going into administration in the summer.

“No. I couldn’t have lived with myself. No. Not at all. That might be the case if we were buying a club we didn’t have a feel for. But no. This is West Ham. It is my club.

“OK, so maybe I am being a bit selfish, too. I’m 73 but I still want to be involved in a Premier League club. I couldn’t wait until the summer then go through the sort of journey Leeds has been through. It could be at least seven years before we’re back in the top tier.

“No, we had to do it now. And let’s not forget West Ham is a special club, a very special club, with an amazing fan base for it size.

“Besides my mother Rosie, who died at the age of 92 a couple years ago, will be so proud of what we have done.”

A snapshot of Gold’s formative days emphasises the empathy he has with the Hammers.

It is now a hairdressers with a flat above, and might sound like a Ron Greenwood formation, but 442 Green Street is where the young Gold grew up within a corner kick of the Boleyn Ground. The house took a couple of shrapnel hits in the Blitz but Gold admits the biggest problem back then was his father.

“It was a difficult relationship. When I started to get a bit older I realised he was to blame for the abject poverty we suffered,” admitted Gold.

“Let’s be honest. My father was a petty criminal. It seemed to me he spent more time in prison than out.

“Then if being poor wasn’t enough I had to put up with all the taunts of being a Jewish boy.

“Kids in school were cruel. But after the war when people started to realise about the Holocaust perception started to change.

“My brother Ralph ended up being an ABA champion and I played for West Ham boys. Suddenly all the anti-Semitism stopped. In the mid-1950s, having played for the youth team, the then West Ham manager Ted Fenton offered me an apprentice contract. But my father wouldn’t let me. He didn’t see it as a proper job.

“He wanted me to carry on as an apprentice bricklayer. Silly sod.”

They eventually made a fortune once they teamed up with rival Sullivan and moved on to property and evening wear. Gold is unabashed about his past.

“Yes, we started to import the early girlie magazines from the US along with paperback books,” he admitted. 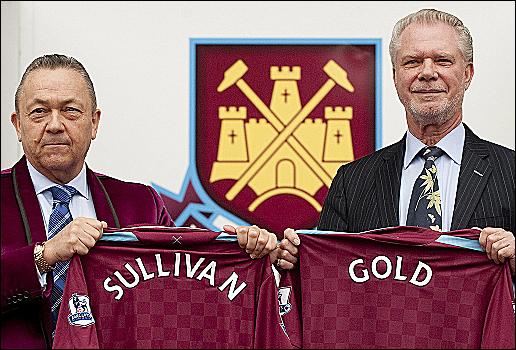 He does, though, acknowledge a twist of fate that got him and his family off a butcher’s hook when their embryonic east London publishing business started to gain wider and unwanted attention.

Gold recalled: “When he was out of nick my dad was a spiv. A travelling salesman. Did we ever get mixed up with the Krays?

“Well what happened was this. George Cornell called us and said he needed to speak to us. It must have been 1966. Cornell rings. He was the enforcer for the Richardsons. He wanted to meet us. We felt there was only one reason – a protection racket.

“My old man is going to meet him in Blooms, the Jewish restaurant in Whitechapel, the following day. I go to bed. I can’t sleep. I’m listening to the radio then on comes a bulletin that Cornell has been shot dead in the Blind Beggar. I thought, ‘s**t. My old man’s killed him’.

“No, really. Look for all his faults, my father wasn’t a violent man but he would stand up to bullies. For two hours I thought he had killed Cornell, but, of course, it was the Krays.”

Clearly Gold is not short on east London street cred.

Not that he has to prove it.

When the Football Association and West Ham couldn’t spare any time, let alone a shilling, for the club’s greatest icon, England World Cup-winning captain Bobby Moore, Gold and and Sullivan recruited him to be sports editor for their Sunday and Daily Sport papers in the mid-80s.

“Bobby Moore was out of work and we gave him a job on the Sport newspapers,” said Gold. “I remember reading an article in the Telegraph saying what a real shame it was that Bobby had to go to work for a DOWN-market newspaper.

“I thought how come YOU didn’t give him a job?

“Yes, we were a down-market newspaper but we felt very honoured to have Bobby working for us.

“I have been through a lot in life but don’t feel bitter really, apart from how football, the FA, yes even West Ham, treated Bobby Moore back then.”

In the 80s, Gold and Sullivan bought 29 per cent of West Ham for £2m but, shunned by the ruling Cearns family at the time, they sold out and moved on to rebuild Birmingham.

Gold recognises they made some mistakes on that 17-year journey at St Andrew’s. But some of the lessons have been heeded. That is why although cutting costs on some areas that had run out of control at West Ham, they will stump up cash to buy players in a bid to stay in the Premier League.

Gold added: “That is the priority. Although I’d like to think we could kick on a bit.

“Consolidation and growing is next. But I promise this. David Sullivan and I will not take a penny out of any profit.

“If we fly to Manchester on one of my charter planes at a cost of £3,000 to watch a game, we won’t charge the club. It comes out of OUR pocket.

“If down the line when we get West Ham up there against Spurs, Villa, Everton, pushing the top clubs, and a billionaire comes in and want to take the club to that next level. Fine.

“I won’t stand in the way, providing that they care for the club, keep me on as an ambassador or something and give me a few seats. I think even I’m a bit too old to bunk in now.”