David Gold Reflects On His Life Experiences In The Surrey Mirror 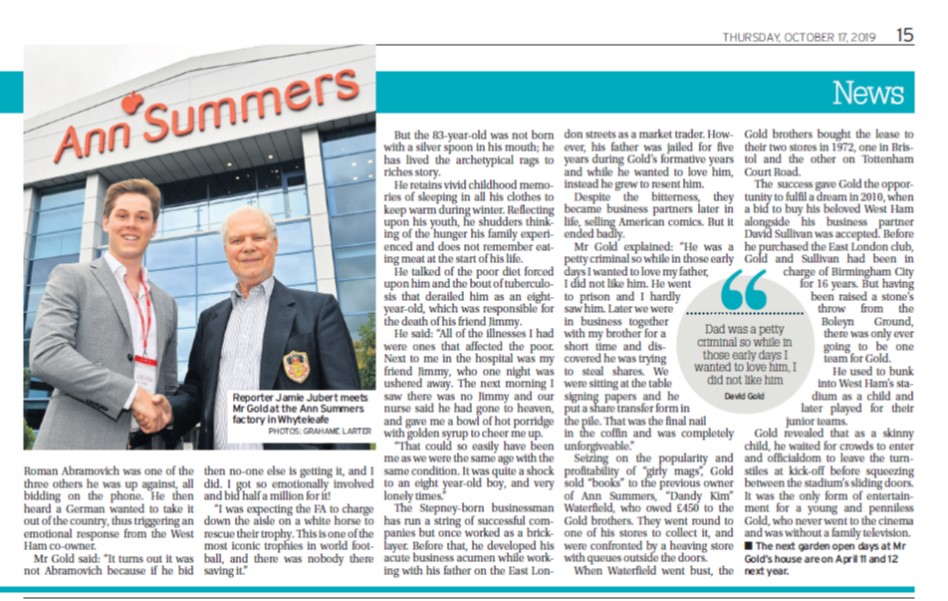 Time to pay for mistakes of the big spenders

Amid all the discussion last Wednesday and Thursday at the annual Stamford Bridge talking shop that is the Leaders in Football conference, what was most notable was the lack of any real disagreement on the main issues. If a single word could be said to characterise the summit it was “consensus”; a sense of broad agreement not only that Something Must Be Done to prevent the sport eating itself but that the Financial Fair Play regulations being introduced across Europe by Uefa provide the best starting point. Continue reading...

Watch the BBC interview with David Gold below.
Continue reading...

David Gold: My fear at learning I was on armed raid gang hit list

Terrified football tycoon David Gold has turned his home into a fortress after learning he is on the hit list of Britain’s most wanted armed robbers.

The West Ham co-owner has spent £250,000 installing CCTV, a direct phone line to the police… and even a PANIC ROOM.

Mr Gold, 74, says he’s been living in fear since being told by police that he was a target of the gang, who have carried out a series of violent raids on rich businessmen. Continue reading...

Match of The Day 2 Feature on Mr David Gold

At the tender age of 73 the Gold Rush has only just begun, Next Stop The FA CUP…

I met up with David Gold at his beautiful Surrey mansion spending the most wonderful and fascinating two hours of time interviewing and just talking to him. David Gold’s businesses are valued in the hundreds of million pounds bracket. I have interviewed many high profile entrepreneurs and do you know what, I love this man! I do not mean in the literate sense, I love him for his kind and open nature. Everyone I spoke to about David that knew him said that he is a lovely man and how right they are. Continue reading...

West Ham co-chairman David Gold talks to Jason and Andy on talkSPORT as to why he went for Avram Grant.

Gold: ‘I don’t believe Becks is at the end of his career’

The West Ham co-chairman chats to Jason and Andy about how close the club were to signing David Beckham and what the superstar still has to offer football.