Promotion could be worth a small fortune to Birmingham City but right now that does not concern chairman David Gold. 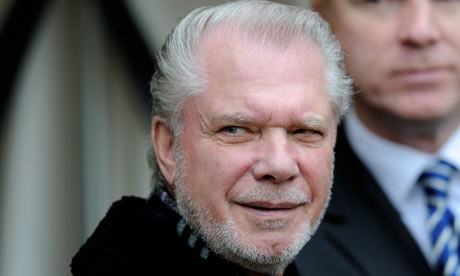 The planning for life back in the Barclays Premier League can wait while everyone at the club savours the joy of reclaiming their place in the top flight.

The Blues’ 2-1 win at Reading was enough to put them back among the elite just a year after being relegated.

And at this moment that matters far more to Gold than the considerable financial implications.

“We can hold our heads high as a Premier League club”

He told premierleague.com: “People talk about us getting £30m or £50m – and all surplus funds will be spent on strengthening the squad in an attempt to maintain our status.

“But even more important is the status it gives the club – and the city.

“They have a bit of stature now in the pub and at work. We are competing with Aston Villa and Stoke and now Wolves so it is great to be back in the top flight.

Birmingham is one of the greatest cities in Europe and once again it is a two Premier League club city.

“The status and pride that gives us is enormous. The money is just a means to an end.”

tense finale
Like the supporters, Gold endured a tortuous afternoon at the Madejski Stadium before the Midlands club secured the victory they needed to ensure promotion.

Keith Fahey put them in front and Kevin Phillips seemed to have wrapped up the points before Marek Matejovsky pulled one back within a minute to set up a tense finale.

Gold laughed: “I think I relaxed for about 46 seconds all match. That was how long we held a two-goal cushion.
“When we went two up, I sat back and said: ‘I am going to enjoy the rest of this match!’ Then suddenly it was straight back to trauma.

“That match summed up our season in many ways. It was a rollercoaster experience with a lot of highs and lows.

“We have been at our best playing the big clubs but have dropped points to teams lower in the table which just shows anyone really can beat anyone else in the Championship.

“But over 46 matches quality told – and it is such a relief not to have to go through the ordeal of the play-offs.”