While the chairman doesn’t want to get too carried away with the work being done behind closed doors, he admits he is ‘quietly optimistic’ about the plans in place. 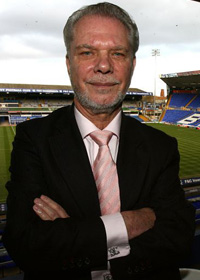 The club transfer record has already been broken with the acquisition of Ecuador striker Christian Benitez last week and Blues have been notably busy with their search for centre-half reinforcements, having already had bids for Coventry’s Scott Dann and Cardiff’s Roger Johnson rejected.

All in all, Blues aren’t wasting any time in attempting to assemble a squad capable of keeping them in the Premier League next season.

Although he experienced a similar situation with Hibernian in Scotland, this is the first time McLeish has spent a summer preparing for life in the English top flight.

And Gold insists that both manager and board are working in harmony to ensure next season is a success.

“This is something that Alex hasn’t done before in terms of going out into the transfer market having got a team promoted to the Premier League, time will tell,” said Gold.

“David Sullivan is working very well with Alex and they have a great relationship when it comes to negotiations.

“Alex has still got time to run, there’s still a couple of months to go of the summer transfer window and we are all optimistic that we are on the right track.

“There’s still some way to go, I wouldn’t say things are falling into place just yet, the next couple of weeks will give a better indication of that.

‘‘But my ultimate belief is that we will complete our programme of getting the people that Alex wants, obviously ideally he’d like to bring in a lot more than Birmingham City could afford.

“I have every confidence that we will be looking forward to starting the season with some very exciting players.

“We don’t want to blow up expectation as we have done before but we are quietly optimistic that we are going to pull off one or two signings that will set the season alight.”

One potential headache for Blues and McLeish this summer will be other clubs playing hardball in a bid to get over-inflated prices for their star players.

Cardiff City’s stance over Johnson was once such example and, although Blues looked to have been unsuccessful with their final ‘take it or leave it’ offer, they could still revive their interest in the 26-year-old centre-back before the start of the season.

However, Blues will have to wait until the end of the Confederations Cup for a decision from American defender Oguchi Onyewu.

The 27-year-old, who is out of contract at Standard Liege at the end of this month, is with the USA preparing for the eight-team tournament in South Africa, which gets underway on Sunday.

Although talks between Onyewu and Blues have been on-going for some time, the late arrival of interest from unknown Spanish and German clubs could still scupper the deal.