Photographer Andy and I had arranged to see David at his home in rural Surrey and, at the appointed hour, in we drove through the electronic gates to the 55-acre estate. The house itself, from the outside, is Victorian, attractive and not by any means pretentious. The grounds contain a private golf course – each green is named after a David Gold company -around which ducks, geese and peacocks freely roam.

We were welcomed by, David’s P.A. and, shortly after, by David himself. As we settled down over a coffee I took stock of the man.

David is in his late sixties, carries hardly any excess fat and looks extremely fit. He is an immensely courteous man and, since during our day together we met some of the people who work for him, I realised that he is a man who inspires great loyalty.He took us on a tour of the house, which he bought some twelve years ago. It originally had four acres of land, but this has now been enlarged through subsequent purchases to own fifty. Built in the 1850s and, when he bought it, very dilapidated, David’s architect wanted to pull the whole structure down and start afresh. But David had other ideas and set about totally transforming the interior, making it into the very comfortable and desirable residence it is today, and adding a stunning indoor swimming pool complex.”How did it all start?” I asked him as we later relaxed in a sunlit sitting room.”It says on my birth certificate that I was born in 1936.1 think they made a mistake and it should have been 1956,” David joked. “I can’t be that old!”David’s earliest memories are of being cold and hungry, often having to go to bed in his clothes to try to find some warmth. His devoted mother Rosie was, and still is, a totally indomitable lady, who has been a great influence on his whole life. When she was ninety, she regularly visited her local gym to work out! David’s formative years were spent during the Second World War, with quite a lot of the time spent in the local air raid shelter. His father, who was away for long periods, he has not seen for over thirty years. David left school at the age of fifteen to become, as he put it, ‘an out of work bricklayer’.”You know,” he mused. “If I could have four people to dinner – any four I liked -1 would invite Margaret Thatcher, because she transformed this country; Isambard Kingdom Brunei, because of what he achieved in such a short time; Charles Lindbergh, who made the first non-stop solo flight
from New York to Paris in 1927. And Mrs Green.” Since both Andy and I looked blank at the last name, he went on gleefully to explain. “Mrs Green was my teacher when I failed the Eleven Plus exam. She said to me ‘Gold, you will never amount to anything in this life.’ I’d just love to introduce her to Isambard Kingdom Brunel!”Gold Air have a range of aircraft that includes its own aerobatics team, a Gazelle helicopter and a fleet of executive jets. 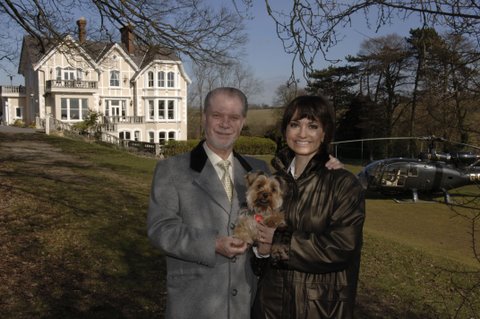 He did eventually find work after about a year but was used as a form of cheap labour. “When I finished my apprenticeship I’d had enough of being a brickie, I wanted to do something else. My brother Ralph was a salesman at the time and had found a little back street shop, just off Charing Cross Road in London, which sold books and magazines. I’d acquired a motor bike by then and sold that to raise the £200 I needed to buythe lease. But, to begin with, the shop did badly and I was really struggling. Anyway, Ralph used to pick me up every Wednesday and we’d go to have a meal with our mum. One Wednesday he rang me to say he had broken down and wouldn’t get to me before about nine or ten o’clock. I kept the shop open until he arrived and took more money in those few extra hours than I usually did in a whole week!”

“Luck plays a tremendous part in our lives”

Although predominantly a traditional book shop, David found that there was an increasing appetite for more adventurous titles. Before long he was opening seven days a week and working from ten in the morning until late into the night.

“Luck plays a tremendous part in our lives,” David said. “If my brother hadn’t broken down all those years ago I would probably have gone bust because I wouldn’t have realised that all the trade was late into the evening. And we probably wouldn’t have been sitting here today.”
After three years David had more than he had ever dreamed of. He had bought himself a two-bedroom bungalow and acquired a second-hand Vauxhall complete with radio and heater. “This, to me, was super-wealthy, because all things are relative.”
But a snag was just around the corner as David’s landlord and told him that there was a redevelopment clause in his lease, and he was given six months’ notice. “I should have had the lease checked by a solicitor,” David told me, “because I left after the six months, and the shop is still there to this day. All the landlord did was let it to a bookmaker for loads more money -this was the time when betting shops were first allowed to open.

“Bad luck? Well, David could have still been there, running one shop and making a comfortable living. As it turned out he was offered another shop by an estate agent, took it, was then offered an even better site and, after some heart-searching, took that as well. Shortly after, he also bought two shops in Tottenham Court Road for £20,000 apiece. Ten years later David was approached by an agent who told him that he had a client wishing to purchase these two shops and offering £2 million – a huge sum, bearing in mind that this took place some 30 years ago.

“But I turned it down,” said David. “I just had a feeling that the offer was too low. I did some research and found that they were planning a
huge development and had already bought a lot of the property around me. So I said I wanted £3 million. The agent came back to me and said ‘Mr Gold, my client has said he will never, never pay £3 million’. After a year of negotiation we eventually settled for £2,999,999!” The rest, as they say, is history. 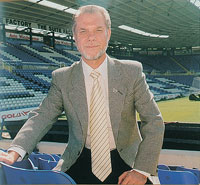 The Gold empire now includes, among others, Gold Aviation, the Ann Summers chain of stores, which is run by his daughter Jacqueline with the help and support of her sister Vanessa, and the Knickerbox chain. Following a lifelong interest in soccer – he was a promising player in his younger days – he is also chairman and co-ownes Birmingham City Football Club.

I asked David how Gold Air International started. “Well,” he said, “One day, about twelve years ago, Ralph and I wanted to get to Newcastle. We wanted to get there and back again in a day and so we decided to get an air taxi from Biggin Hill airfield. We got there and were met by a scruffy lad who told us to go to a shed and said someone would be along in a minute. When the pilot appeared he didn’t look much more than fourteen, and we had an awful, terrifying flight in an old Aztec aeroplane.

“When we eventually arrived back we decider that, if we were going to do these trips regularly, we ought to buy our own plane. So we bought a Beechcraft KingAir 200, which was delivered a few weeks after. And that’s how Gold Air was born.”

One of David’s passions is flying and he is a past winner of the prestigious Malta air race. David offered Andy and myself a trip across to Biggin Hill on the Gazelle helicopter which, as you can imagine, we were not slow to accept. We flew, literally as free as a bird, over the busy M25.
Both of us have now added ‘A helicopter’ to our Christmas lists!