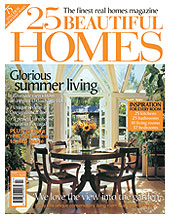 Set in the midst of stunning countryside and surrounded by a lake, David Gold’s house stands out like a jewel. ‘I didn’t start out wanting to renovate a Victorian house, I just wanted to make a comfortable home to live in,’ says David. ‘But this house intrigued me.’ The house was actually on its way to dilapidation, needing everything from a new roof, repainted walls, new plumbing and electrics, replastering and virtually everything else. ‘It was completely uninhabitable,’ says David. ‘But, I suddenly realised the importance of the history of the house and the need to save all the beautiful features within it.’

David realised it was a house worth saving, not least for the intricate cornicing, which lines the ceilings in every room. It was badly damaged and had to he repaired by craftsmen. which took several months. But David had become determined to return every part of the house as close to its mid-19th-century origins as was possible. ‘I expected the work to take around 10 months— unfortunately, I didn’t actually move into the property for two and a half years,’ he remembers.

Everything about the restoration was care­fully researched and when David could not find suitable marble fireplaces in England, he spent a week in France finding the correct period fireplaces there. ‘Of course, some of the furniture and fittings had to be replicas,’ explains David, ‘but turning it back into an 1850s house became a passion for me.’ The fabrics within the house had to be traditional, as David didn’t want any aspect of the decor to detract from the overall appearance. All the windows in the house were replaced with replicas of the originals, as were the wooden shutters. ‘It had to be like an 1850s house where, in the winter, the Victorians would put the shutters up to secure the house then go off to the South of France,’ says David.

While the house started out as a one-man crusade to restore a piece of history, six years ago Lesley, David’s fiancee, came into his life and her influence soon started to soften the look of some of the rooms. The pictures ot Victorian battleships on the walls of the elegant dining room were replaced by classic Victorian floral paintings. Lesley adorned the antique cabinets with classical busts, and the blue chests of drawers in the master bedroom were painted pale cream with gold trimmings. It gradually turned from being a predominantly male domain to more of a family home. David is full of praise for Lesley’s contribution. ‘She has had an amazing impact on the home,’ says David. ‘Because of my heavy work schedule, it was left to Lesley to hunt around shops and antique dealers for furniture. She would often have various pieces of furniture sent to us so we could try them out for a couple of weeks to see if they fitted in with the scheme.’

David feels that not only has he created a superb home for himself, he has also preserved a sumptuous building for generations to come. ‘It has been a labour of love for me — I’ll probably be here all my life,’ he smiles.