The Times Article – “A full paid member of the rotory club” 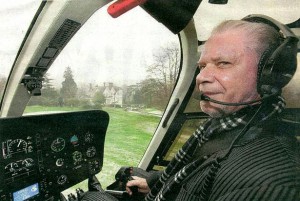 Written off before he even started, the East End boy built an empire but isn’t finished yet, writes Billy Kenber

David Gold is hunched forward in his business suit, perring intently at the illuminated control panel of a Eurocopter 120. Outside, snow continues to fall and the gleaming black helicopter begins to rock and shake as it powers up.

The whir of the rotors grows louder, but the steady breathing of the Ann Summers owner is audible over the headphones as he concentrates.

He reaches down and eases up a large lever in the base of the aircraft. The leaves on the lawn ripple away and, suddenly, we are floating gently above the frozen ground.

For a man who grew up in Dickensian poverty in the cramped streets of the East End of London, it is a remarkable flight. As a penniless young boy, Mr Gold was told by his teacher that he “ain’t going to amount to nothing”. Now as we rise, his Surrey estate sprawls out below, revealing a tennis court, lake and 19-hole golf course.

As he pirouettes the aircraft through a tree-lined avenue, Mr Gold explains how he learnt to fly helicopters seven years ago when, after a lifetime flying fixed-wing aircraft, he went looking for a new challenge. “When you’ve got an aeroplane airborne you can push in the auto pilot and the pressure is reduced massively. On a helicopter that’s not the case,” he says.

Earlier, sitting in the living room of his spotless mansion and sipping cups of tea, Mr Gold elaborates on how he came to fulfil a lifelong “craving”,”It’s not what people think, it’s not an indulgence,” he says. “They really are very, very practical for business.”

His earliest experience of flying was an unhappy one. As a teenager, he was a member of the Hornchurch Air Cadets and was taken up for a 15-minute flight in a Tiger Moth. “It was an experience in terror,” he laughs. He finally began taking lessons 20 years later, though he was forced to sneak them in because his young wife, Beryl, had an extreme fear of flying.

After getting his license in the early 1970s he quickly began flying friends abroad and using it to visit wholesalers and printers up and down the country.

After a while Mr Gold, who built his initial fortune printing and distributing soft-porn magazines, began to enter competitions. He recalls his delight at winning the Malta Air Rally in 1980 and 1981. “Wow, that was exciting,” he says, later pointing out a photo of himself dressed in a suave white suit as he collected his trophy. “I won the air rally twice, and on the third time…” His voice trails off. After a pause, he continues, explaining how on the day before the results were announced he had lunch with the wife of his co-pilot, Mark Campbell.

As they watched from the balcony, Mr Campbell went past in a plane flown by another man, Teddy White. “I saw them kill themselves,” Mr Gold says. “I was sitting on the balcony [and] I saw them as they came by the hotel. I could read the word ‘Firestone’ on the tyres. All the pilots are around the swimming pool and he’s coming in and he’s banking, seriously banking. And I’m thinking ‘my God’. And they crashed and were killed.”

A year later, another friend died along with six passengers when he crashed while coming in to land at Stornoway airport. They survived the crash but drowned in the Atlantic. It would be a decade before he decided to regain his licences.

The break in flying coincided with a dramatic transformation in his Ann Summers chain. In 1981 his daughter, Jacqueline, now chief executive, came up with the idea of Tupperware-style parties selling sex toys and lingerie to women in their own homes. It proved revolutionary. When Mr Gold bought Ann Summers in 1972 it consisted of two run-down sex shops. There are now 150 stores and the company has an annual turnover of nearly £120 million.

When Ann Summers launched, it scandalised Middle England and shopping centre owners. Now, in an era when Boots is offering loyalty points to buyers of sex toys, it is a transformed marketplace. “I think Ann Summers will always be the innovators. There’s no boundaries as far as we’re concerned. We follow customer demand and always try to keep make the customer experience as good as possible.”

Mr Gold bristles at the mention of criticisms of the source of his wealth. “You will be hard pressed to find anybody on this planet that says Ann Summers ruined my marriage, or Ann Summers ruined my life,” he says. “I can name you ten titled people who run cigarette companies, which is, if you think about it, outrageous. And yet people question the morality of Ann Summers.”

At 75, and with a fortune estimated over £340 million, he has no interest in retiring and his joint ownership of West Ham United, with his long-term business partner David Sullivan, marks the fulfilment of a lifelong dream. “Why would I want to retire?”, he says. “What I do is a pleasure, my life’s a joy.”