The staggering financial mismanagement of West Ham by their former Icelandic owners has been laid bare by new chairman David Sullivan after he revealed the club are £110million in the red.

Lifelong Hammers fans Sullivan and business partner David Gold were at Upton Park yesterday to officially take control after purchasing of 50 per cent of the club from CB Holding for £50m, and Sullivan moved quickly to condemn the regime of Bjorgolfur Gudmundsson and Eggert Magnusson.

He said: ‘We would not buy this club at all if this wasn’t West Ham. We bought this as supporters, not from a business point of view. It makes no commercial sense for anyone to buy this club. We’ve paid down some of the debt and injected some working capital, but there’s still more than £100m of debt.

‘In that, there’s £50m owed to banks, there’s £40m owed to other clubs. In addition there’s the club’s settlement to (former manager) Alan Curbishley, so the real debt is about £110m. 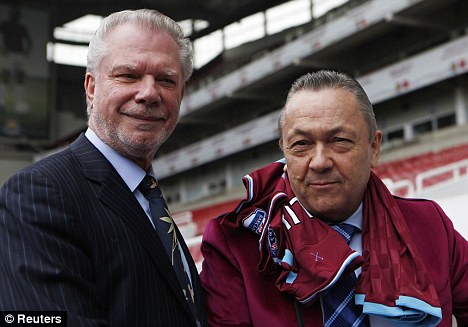 ‘The Icelandic owners built up a business formula that did not work. So have Man City and Chelsea, but if you have an owner that is prepared to subsidise the club for £50m or £60m a year then it is not negligence. Clearly, Magnusson, or Mr Egghead, thought that the owner (Gudmundsson) would subsidise the club.’

The task facing the new owners has been made all the more difficult after CB Holding chief executive Scott Duxbury was forced to borrow against the club’s future income just to keep it afloat as a result of the mess that Gudmundsson and Magnusson left behind.

The collapse of Gudmundsson’s business empire meant he was no longer able to fund the lavish spending which was the hallmark of Magnusson’s spell as chairman. But despite jeopardising West Ham’s future, Sullivan revealed that, Magnusson had contacted him about a return to the club.

‘Magnusson phoned us up six weeks ago and said that he would like to be involved again,’ said the former Birmingham co-owner. ‘I don’t know what the man is thinking. Why do we need him and what would the fans think?

‘If we popped up and said that this is our new chief executive, they (the fans) would go mad.’

Sullivan and Gold have appointed former Birmingham chief executive Karren Brady as vice-chairman and will pay her out of their own pockets.

Putting the club back on an even keel will not be easy given the emergency measures CB Holding, whose major stakeholder is stricken Icelandic Bank Straumur, had to take.